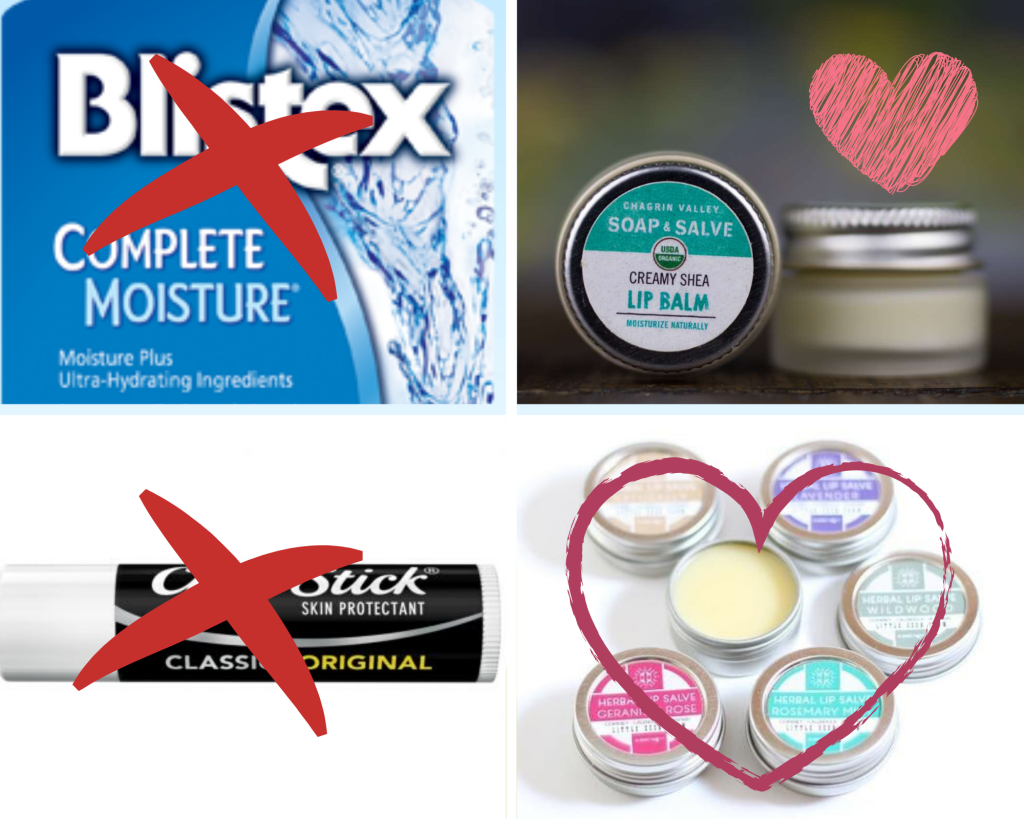 As the new year approaches, you may be thinking about positive changes you can make for yourself. One change that is positive and healthy is swapping out animal tested, toxic products wrapped in plastic for ones that are non-toxic, cruelty-free, healthy and sustainable. This can certainly be simple to do and so should be high up on your list.

When you think of which products should be first, some use the replacement as they run out concept. This is certainly a viable concept as you are able to avoid a large expenditure as well as a waste of your current products. I have always appreciated this approach and encourage others to do the same, however if you are vulnerable to immune disorders, have reactive or sensitive skin, and or cancer is prevalent in your family you may consider switching products that are more readily absorbed sooner. These products would include anything that can be ingested, or is more likely to sit on your skin longer and so have a higher chance of being absorbed.

These products include lip balms, facial lotions and serums, and body balms and lotions. Not that soaps and cleansers aren’t important, however they will be on your skin for only a few minutes at best and then will be rinsed down the drain. With that being said, to switch from a bottled product such as shampoo or body wash to a solid bar form may be a simple switch just to avoid adding plastics to your home and potentially to the landfill.

Lip balms are on the top of this list for clean swap as it is more likely to be applied and reapplied throughout the day as well as partially ingested as you eat or drink food. Using the EWG Skindeep database, toxicity data has been pulled for a few commonly used lip balms to compare their ratings based on their published ingredient lists. For those of you who haven’t discovered them yet, EWG (Environmental Working Group) is a non profit that uses information gathered from current research and ranks products based on their ingredient list on a scale from 1 to 10 with 10 being the most hazardous. They are a fabulous wealth of information.

EWG rates all products with the word fragrance in their ingredient list a bit more harshly because there is no way to know what is being referred to by this word. The biggest concern here is that there is no transparency when that word is used. Both chapstick and EOS used this word. While most of the ingredients in EOS brand are on the low end of the concern spectrum, depending on which of the lip balms you chose, you may get a dose of fragrance as well which is likely part of the allure of the product. The least these makers could do is be transparent about what the “fragrance” is so that those with sensitivities can avoid products that may contain them.

Parabens such as propylparaben and methylparaben are suspected endocrine disruptors and are added to products for their preservative qualities. This is what gives many commercially available products including food their longer shelf life. There have been numerous studies that compare the effects of parabens to natural estradiol and determined that parabens can be used within a margin of safety (MOS).
Examples of effects from endocrine disruption can be birth defects, developmental defects, and tumors. While use of parabens has been deemed safe under “specific margins of safety”, it is difficult to determine what the effects might be when when we layer product after product onto ourselves each with the minimal amount of any given number of parabens or paraben derivative products added “within the margin of safety.”

According to Kavlock from the EPA, ‘Such effects may have an endocrine-related basis, which has led to speculation about the possibility that these endocrine effects may have environmental causes. However, considerable scientific uncertainty remains regarding the actual causes of such effects. Nevertheless, there is little doubt that small disturbances in endocrine function, particularly during certain highly sensitive stages of the life cycle (e.g., development, pregnancy, lactation) can lead to profound and lasting effects’ (Kavlock et al., 1996. EPA, 1997).

Oxybenzone is used as a penetration enhancer and allow ingredients to absorb into the skin more quickly. EWG sites a study by Hanson KM, Gratton E, and Bardeen CJ in 2006 which states that oxybenzone produces excess reactive oxygen species that can interfere with cellular signaling, cause mutations, lead to cell death and may be implicated in cardiovascular disease. There is another study cited that contradicts this. Other human case studies supported a concern that the ingredient may cause possible immune system or allergenic effects. In simple terms, the ingredient may cause a person to develop a more sensitive and reactive immune system.

‘…prevalence rates for some of these illnesses are rising for what Miller says must largely be environmental reasons. “Our gene sequences aren’t changing fast enough to account for the increases,” Miller says. “Yet our environment is—we’ve got 80,000 chemicals approved for use in commerce, but we know very little about their immune effects.’

The European Commission on Endocrine Disruption says there is strong evidence to support that octinoxate is an endocrine disruptor on humans as well as significant wildlife and environment disruption. One or more human case studies show possible photoallergic or allergenic effects and lastly, it has been shown to accumulate in people. Bioaccumulation alone makes this a problematic ingredient, due to the likely build up of these ingredients in wildlife as well as potentially in our food supplies.

There are other chemicals listed, but the main concerns have been covered with the exception of petroleum. Now, we all know that petroleum was used by most everyone in the U.S. as a salve for burns and scrapes and has been generally accepted as safe and is not bioaccumulative, however there are better options than substances derived from fossil fuels for our personal needs.

Lastly, each of the major brands insists on packaging in plastic due to its availability and shelf life potential. Plastics are another issue and even if they are recyclable, should be avoided since most times recyclable packaging still ends up in the land fill and I wonder about the release of micro plastics into the environment during production or during processing into recycled material. Beyond this there is potential for the plastic ingredients to leach into the product over time.

This would be an excessively long “rant” and pointless if positive options were not listed. Two are listed above in the table. Both are cruelty-free, packaged without plastic, sustainably produced, and the only ingredient that is not listed with a hazard of 1 by EWG is castor seed oil.